Seattle weather certainly has been interesting lately. First, we had one of the driest summers on record, followed by the wettest November on record. Throw in a nice ice and snow storm that closed school for two and a half days, add in a wind storm that cancelled school for another day this past Wednesday (no electricity!) and we’ve got plenty of casual conversation fodder for the rest of the winter. But it didn’t end there. Oh, no. Late Thursday night and early Friday morning, we were hit by the worst wind storm in years. Worse, they say, than the 1993 Election Day Storm, though thankfully not nearly as bad as the Columbus Day Storm of 1962. C’mon, it wasn’t even on a holiday! What are we supposed to call it? Metroblogging Seattle is going with Windpocalypse 2006, which has such a perfect over-the-top quality that I’m surprised none of the local news stations thought of it first.

As for us, we got off easy. Our power went out amid howling winds shortly after midnight and we were prepared to be without power for a while. I figured 12-18 hours minimum. Surprisingly, the power came back on just before dawn. Cool. A quick look around the yard and up and down our street revealed no major damage, so I thought maybe it wasn’t as bad as the predictions (keeping in mind that by the time I went to bed, there were already three known fatalities in the Seattle area). I decided to go out to Cafe Javasti for coffee and scones. On the way, I saw lots of small downed branches and other debris, but nothing too serious. Javasti had no power, though, so I headed down toward the Wedgwood Torus District. Starbucks was as crowded as I’ve seen it, with a line out the door. As I’d soon find out, this was because it was one of the few coffee places in Northeast Seattle with power. Just a few blocks south, Top Pot and Grateful Bread were dark. So, the power was out north of 85th and south of 77th. We were in a little island of electricity. 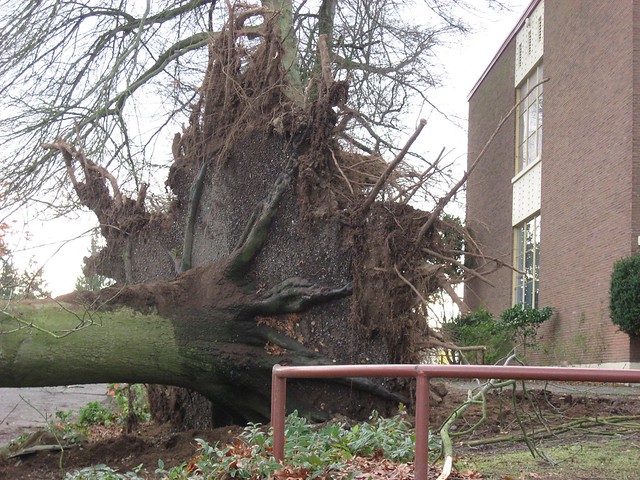 It was only when I went out again a couple hours later to take some pictures (map) that I discovered that a huge tree had taken out the power to the middle school less than 500 feet from our house. We were lucky.