I’ve been meaning to write something about my new obsession for a couple months now, but I haven’t had a chance. I’ve taken up smoking. No, no. Not that kind of smoking. Not this kind either. No, I mean the low, slow, intoxicating smoke of real barbecue. Last Thanksgiving, I read an interesting weblog post about a great combination of technology and food. A Smoked Turkey With An IP Address tells the story of cooking a Thanksgiving Turkey low and slow on a Big Green Egg with the help of an ethernet-connected temperature controller. Cool (and Yum!). I started looking into the Big Green Egg and other ceramic grills and remembered that an aquaintance of ours is an investor in Primo Grills. Unlike the BGE, Primo’s grills are American made. They’re also bigger than the biggest Egg. Unfortunately, there was no Primo dealer in Washington State, so nothing came of my grand barbecue plans.

This spring, Kathy asked what ever had become of my crazy grill idea. She didn’t say so, but I suspect she was nurturing my new obsession just so that she’d have a reliable source of good barbecue in Seattle. I checked again, and it turns out there’s now a Primo Dealer in North Bend, about a half hour from Seattle. We drove up there to take a look and I was sold. Mark Adamski at Cascadia Spas & Stoves was great to work with and we had our new Primo Oval delivered a few days later (the thing weighs almost 200 pounds!). 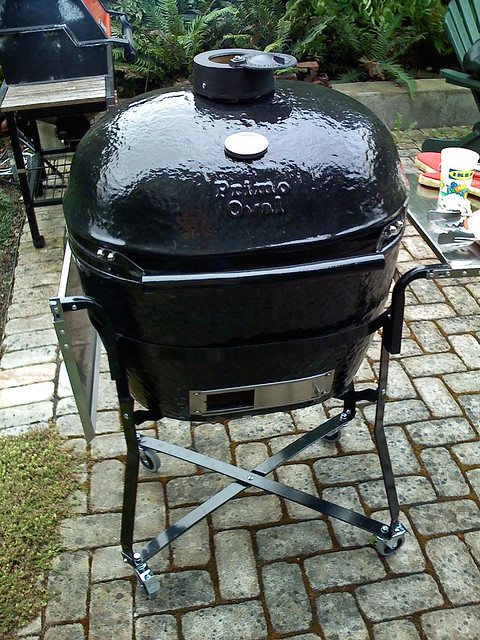 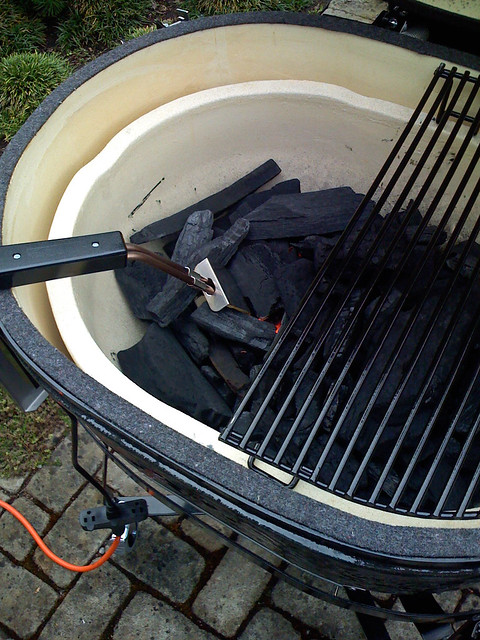 I love it. Unlike our old gas grill, it can reliably maintain both low barbecue temperatures and high searing temperatures. It has thick ceramic walls that help it hold in the heat, as well as making it very frugal with fuel. Speaking of which, it burns only lump charcoal (briquettes contain too much ash). When the grill first arrived, I cooked steaks the first night, salmon the next, and hamburgers the third, all on the same load of charcoal. Unlike a typical charcoal grill, you don’t need to light the full load of fuel and wait for it to burn down. You just light a few spots and adjust the top and bottom air vents to maintain the temperature you want. When you’re done, just close the vents to quench the fire.

In addition to a variety of typical grilled stuff, I’ve made a couple “true barbecue” meals. I’ve made pork ribs a couple times already and they’re easily the best ribs I’ve had in Seattle. This week, I finally got up the gumption to try pulled pork. It’s not difficult, by any means, but the cooking time (up to a day!) seemed pretty daunting. Thankfully, my Stoker arrived while we were in New England. 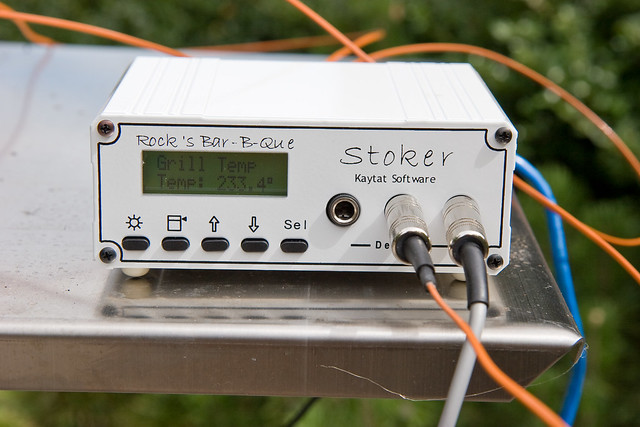 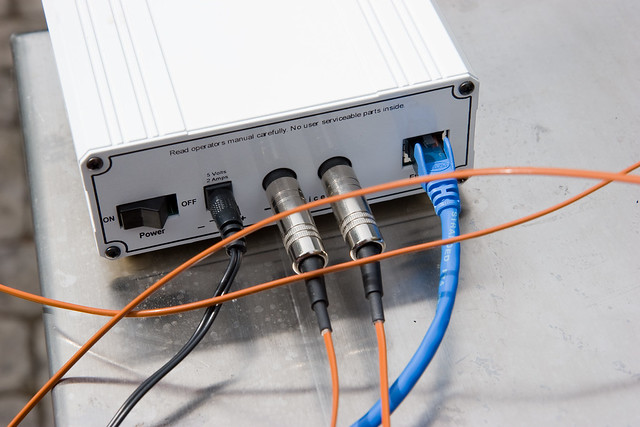 The Stoker controls the temperature of the grill and monitors the temperature of the meat. It can alarm when the meat gets up to temperature or when the fire gets too hot or too cool. It also has an ethernet port and can be controlled through a web interface. Overnight cooking seems much more doable with a Stoker. When we were at the farmers market on Saturday, I bought two boneless butt (shoulder) roasts from Skagit River Ranch. Boneless isn’t ideal, but it’s all they had. Sunday morning, I patted them down with rub and started a fire in the Primo. By the time the meat was on the grill, it was about noon. I threw on a few hunks of apple and alder wood and kept a close eye on things until the temperature stabilized. It was quite a sight. 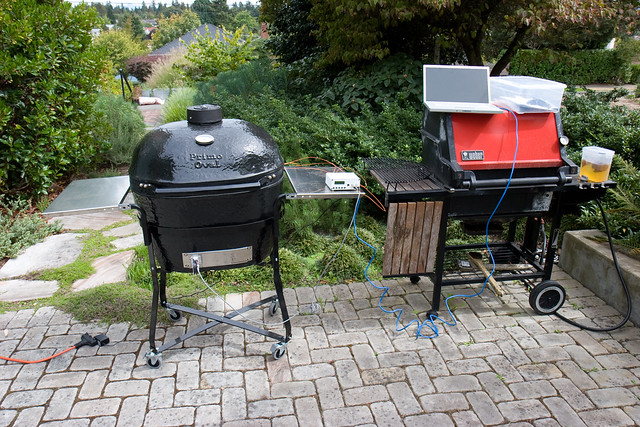 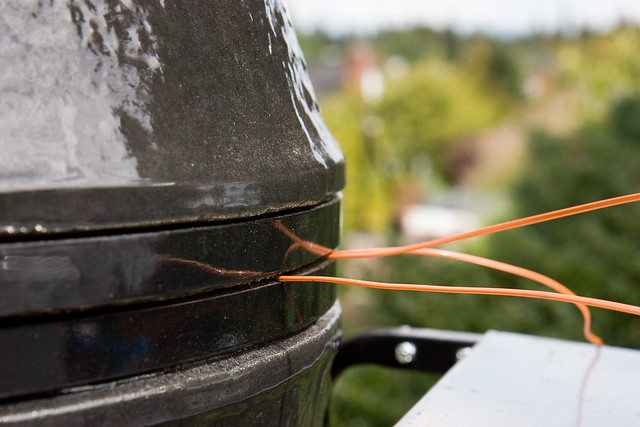 I knew the meat wouldn’t be ready in time for dinner and suspected it would go all night (I was aiming for lunch on Monday). I just hoped it wouldn’t be done when I was sleeping. Later on Sunday, the rains started and it rained right through the night. My improvised rain shields seemed to do the job… 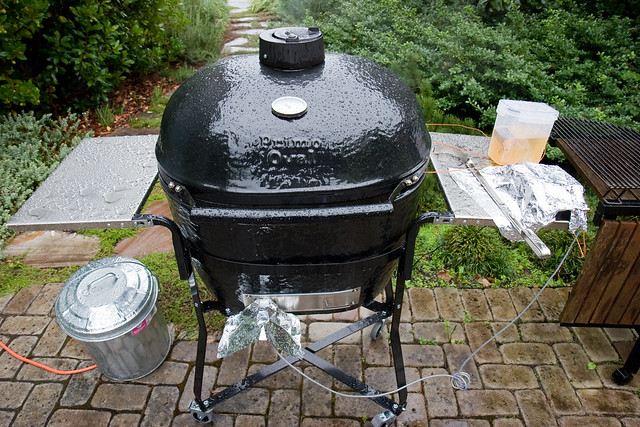 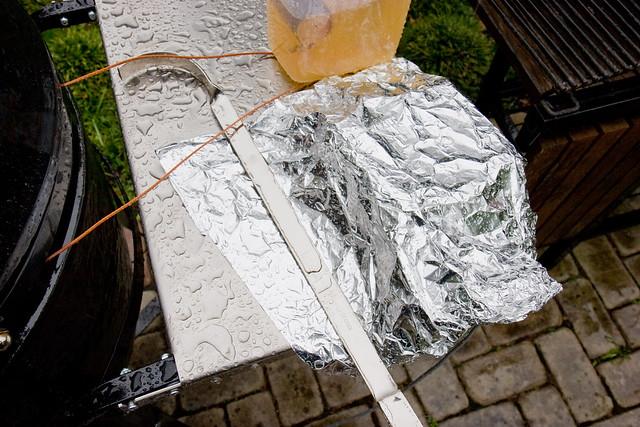 I set the alarm for 4:30 am and went out to check the grill. The grill temperature was still right at the set point of 215°F and the pork butt had about 15° to go. Big hunks of meat like pork butt and beef brisket typically go through a long temperature plateau as the fat and collagen melt, then rise quickly to the final temperature. (Update: If I’m reading my McGee right, it’s the collagen breaking down into gelatin.) I figured I could probably go back to bed for a while. At about 8:30, I checked again and the meat was close. By 9:00, it was ready. I hadn’t opened the grill since about 7 pm the night before and didn’t know quite what to expect. Would it have that beautiful dark and caramelized crust that it should? 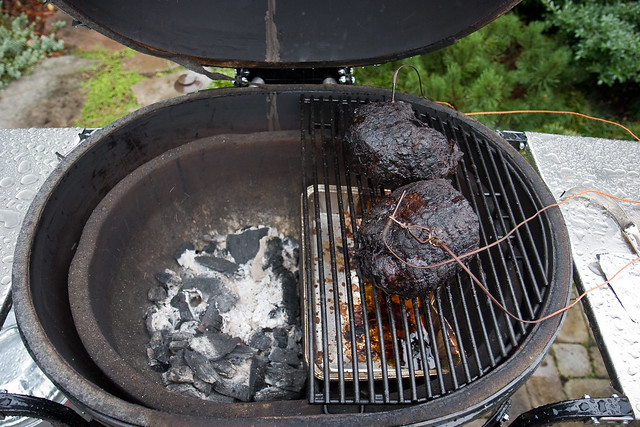 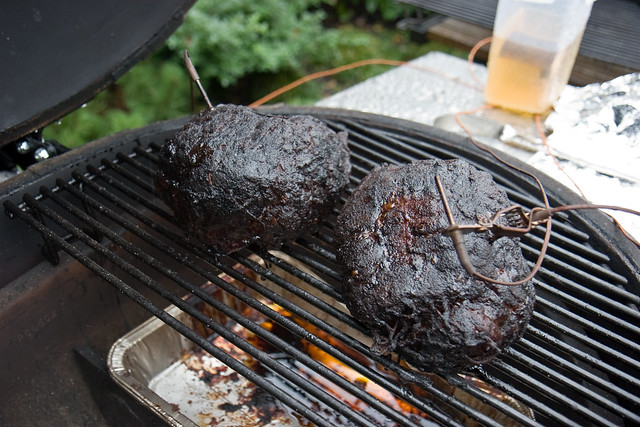 Wow. Perfect! As I took the meat off the grill and scurried inside with it, I could tell it was just about ready to fall apart. I also noticed that there was quite a bit of unburned charcoal left in the grill after 21 hours. I wrapped the pork butts in foil, then in towels and put them in an insulated cooler to keep them hot until lunchtime. I made up a “Lexington Style” sauce and waited. The meat was still too hot to handle when I started pulling it just before lunch. The smell was intoxicating. Of course, I had to try some as I worked. It was well worth the wait. I mixed in some of the sauce and served it up. 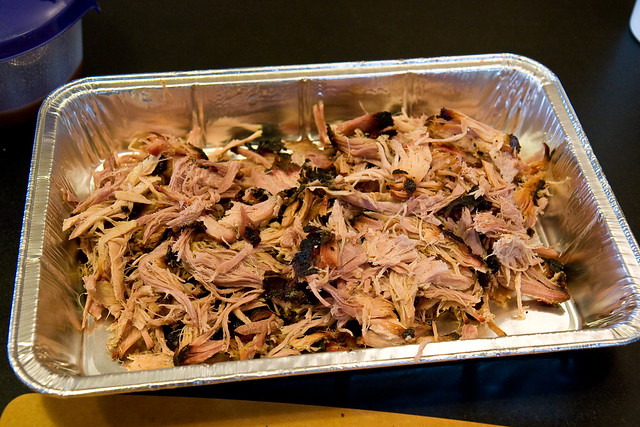 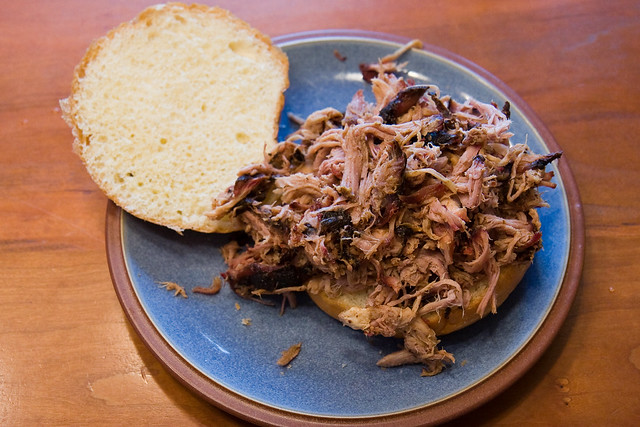 Delicious! Best pulled pork in Seattle… but not perfect. Next time, I’ll add some more wood to give it a stronger smoke flavor. I’ll also raise the grill temperature a bit to cut down the cooking time (16 hours sounds pretty reasonable). And I’ll start it just before bedtime, so I can sleep through the boring part when nothing seems to happen. Now, I have to try a brisket. Oh, and do a trial run of the smoked turkey I hope to serve at Thanksgiving. And…