I’ve already written about my wonderful new toy. The Primo Grill has completely changed the way I grill. But I don’t really have to write another fawning entry about the Primo, do I? No, I thought I’d just write a bit about what I’ve been doing with the thing. At the risk of turning this into a food blog, here it goes…

I mentioned before that I’d made ribs a couple times. I made them one more time and invited some friends over to test my “best in Seattle” claim. This time, I skipped the baby backs and cooked up a couple huge racks of ribs. They were sold as “St. Louis Ribs” but my copy of The Meat Buyers Guide says otherwise. They were actually full, untrimmed racks of ribs. Other than being a little fatty along the edge that should have been trimmed off by the butcher, they were amazing, as expected. I went a little heavier on the smoke this time (alder and apple) and a little lighter on the rub. I kinda expected to have some leftovers, but we managed to polish off the whole lot. Delicious. I’ve also cooked another batch of pulled pork (again, delicious).

At the end of that last entry, I said I’d like to try brisket and I’ve done that, too. I cooked up a 9-pound flat-cut brisket (overnight–10 hours at 250°F), smoking it with alder, cherry, and a little bit of hickory. From what I’d read, ten hours is a little short for brisket cooked at that temperature, so I was worried it would be tough. It wasn’t. I can’t quite heap superlatives on it like I did with the ribs and pulled pork, but is was very good. I think I’ll drop the temperature a bit next time. Elsewhere in the beef universe, we’ve had our very favorite cut of steak a couple times. The flatiron is an amazing thing. It’s cut from the chuck, so you’d think it would be tough, but it’s not. It’s as tender as a rib eye, with the full beefy flavor of a sirloin cut. And it’s relatively cheap. Mmmm.

Okay, so much for the pork and beef… on to the poultry! I bought a chicken sitter so I could try beer can chicken without the beer can. I’m sure you can guess how it was. Yup: moist, tender, and delicious (and beautiful–the skin cooks up crispy and golden brown like something out of a cooking magazine). So that leaves me with turkey. I plan to cook our Thanksgiving turkey on the Primo, so I thought it would probably be a good idea to try it out in advance. I bought a 4-pound boneless breast and picked the rainiest, most blustery day of the year (so far) to cook it. It took a little over 4 hours, three at 250°F and the last at 350°F. 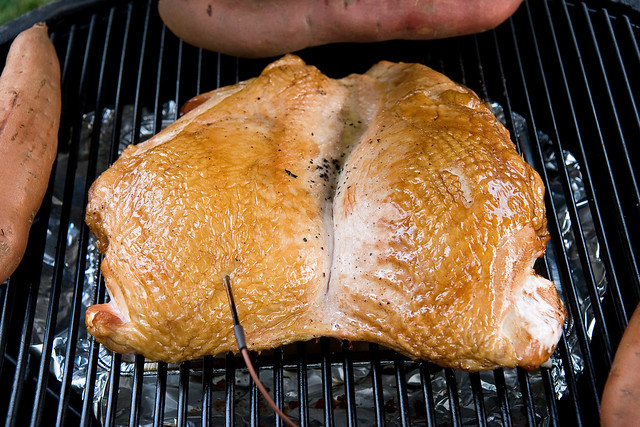 And again, the results were great. Smoked turkey is near the top of Kathy’s favorite barbecue list and she loved it, so that’s a good sign. It has made some great sandwiches, too. I did very little to the turkey before throwing it on the grill: just a little salt, pepper and olive oil. I think next time I’ll brine the turkey overnight before cooking it to make it a little more moist. I’m not sure how turkey would hold up to a more flavorful rub, though. Clearly more experimentation is required.

As you can see in the picture, the turkey was framed by some sweet potatoes. I love sweet potatoes, but in the past we’ve had them exactly once a year: on Thanksgiving. Kathy bought some shortly after we got the Primo and I just threw them on while I was cooking the meat. Yum. Since then, I saw a segment on Barbecue University where he cooked corn in the husk right down on the coals, so I tried it with sweet potatoes. Wow. The exterior gets all black and charred, but the inside cooks up moist, sweet, and creamy. What’s more, they cook quickly enough that we can have sweet potatoes even with a quick-grilling food like steak or burgers.

So I guess I’m addicted to barbecue now. I have yet to have a real disaster, though I know it’s coming sooner or later. It’s been especially rewarding that Henry and Charlie really seem to enjoy the stuff I’ve been making. Charlie (Mister Protein) will chow down on any sort of meat, so it’s not surprising that he likes it. But Henry can be a really picky eater sometimes, especially when it comes to meat. With the exception of one overly-smoky steak, he has eagerly eaten everything I’ve made, requested seconds, and asked us to pack leftovers in his lunch. This is equally true for the veggies I’ve grilled and the fish, too. How long will that last?