When I bought my first dSLR a few years back, I chose to skip the undistinguished kit lens and opted for the 28-135mm IS zoom instead. It’s a pretty good lens and served me well, but it’s a little slow at the wide end (f/3.5) and quite slow at the telephoto end (f/5.6). Plus, my camera doesn’t have a full-frame sensor, so at the wide end, I end up with a field of view equivalent to a 45mm lens–not exactly wide angle. I took a lot of great shots with that lens, but on our Canadian Rockies trip last year, I started to wish for something with a little more on the wide end (insert “wide end” joke here). Last summer, I did my research and ended up buying the Canon EFS 17-55mm f/2.8 zoom.

Now, I’ve been taking pictures for a long time, but I never expected I’d be the sort to rave about a lens, but wow. I love this lens! It’s incredibly sharp, which is certainly nice, but what I really love is that extra speed. Combined with the image stabilization, I can take handheld existing-light shots that I would have thought impossible a few years ago. It doesn’t hurt that I can crank my 20D up to 800 ISO with virtually no change in image quality. 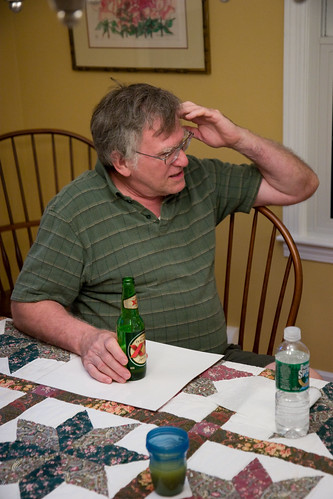 The faster lens also gives me a brighter viewfinder and better focusing performance. Nice. Of course, in switching from the 28-135 to the 17-55, I gave up a whole lot of telephoto range. I figured I’d get a better telephoto zoom someday, but for the time being I could just switch back as needed. Well, last week “someday” arrived.

Canon has four (!) 70-200mm zoom lenses comprising each combination of f/2.8 or f/4, with or without image stabilization. They are all very highly regarded by people in the know. I settled on the f/4 IS version. It’s smaller and lighter than the f/2.8 version, and a whole lot cheaper, too. Canon claims a remarkable 4-stops of image stabilization, which most reviews have said is accurate. The old rule of thumb is that you shouldn’t try to shoot handheld at less than one over the focal length. So at 200mm, that would be 1/200 second. Four stops gets it down to 1/25, which is pretty darn slow. Of course, image stabilization doesn’t help if it’s the subject that’s moving, but still. How does it work? Well… 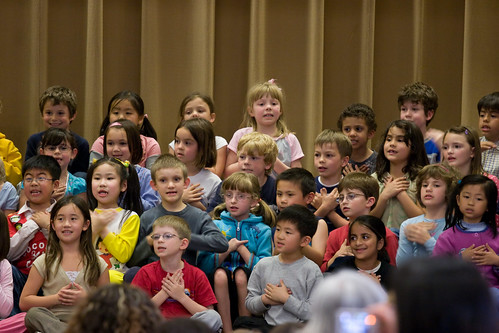 This picture was taken from the very back of a rather dimly lit school auditorium. Handheld, no flash, 1/25 second. Amazing. So that’s new Camera Toy #1.

With all this new gear, I finally realized that my old camera bag was more than a little inadequate. It’s a small top-loader that really can’t handle more than the camera and one extra lens. With the 70-200 on the camera, it had room for nothing else. So I did some more research and settled on the Crumpler 7 Million Dollar Home:

It’s got plenty of room for all my stuff, it’s built like a tank, and best of all, it doesn’t look like a camera bag. When Kathy first saw it, she said it looks like a diaper bag and that’s fine with me. The less my significant investment in photo equipment looks like a significant investment in photo equipment the better. So that’s new Camera Toy #2.

Despite being the smallest and cheapest of the three, Camera Toy #3 is by far the geekiest gadget of the three. It’s a tiny GPS data logger. The AMOD AGL3080 is smaller than a cell phone and does just one thing: log GPS location and time data.

When you’re ready to use the data, plug the device in via USB and it mounts like a thumb drive so you can copy the data to your computer. Assuming your camera’s clock is set to the correct time, you can then use an application like GPS Photo Linker, myTracks, or my personal favorite HoudahGeo to match photos to GPS data and write the location information directly into the photo files. Flickr automatically recognizes this location data when you upload and can helpfully put your pictures on a map. I’ve been doing this by hand ever since flickr rolled out geotagging back in 2006, but having an automated process will make it much easier. Someday, I’m sure my camera-of-the-future will geotag my photos for me as they’re taken (some cameras already do and more are on the way), but this gadget will tide me over until that day arrives.

I expect to see some revolutionary applications that take advantage of geocoded photos in the near future. Microsoft has a research project called Photosynth that is already pretty cool. And I’m embarrassed to say how much time I’ve wasted watching flickrvision.