It’s hard to believe now, but there was once a time when I didn’t know the wonders of frozen custard. I’d probably had it at some point (Carvel is pretty close to frozen custard), but didn’t differentiate it from regular ice cream. For folks from the midwest (especially, say, Wisconsin), this is a little like saying I didn’t know what bread was. So be it.

One time when we were back home from college, Kathy’s mom took us to a new place down in Rockville called Wally’s. They served frozen custard and made wonderful treats called concretes (think DQ Blizzard). My eyes were opened. As most of you probably know, frozen custard is smoother, creamier, and richer than regular ice cream. Better yet, it has an absolutely unmatched texture: a sort of firmness at first, followed by creamy, smooth meltiness. Yum. Sadly, Wally’s didn’t last long. Sadder still, neither Portland nor Seattle were Frozen Custard towns.

Flash forward to 2003. Kathy and Henry and I took a month-long driving vacation across the USA. Armed with a copy of Jane and Michael Stern’s Roadfood!, we made sure to sample the finest burger joints, diners, and ice cream places across the nation. In St. Louis, Roadfood led us to Ted Drewes, right on old Route 66. 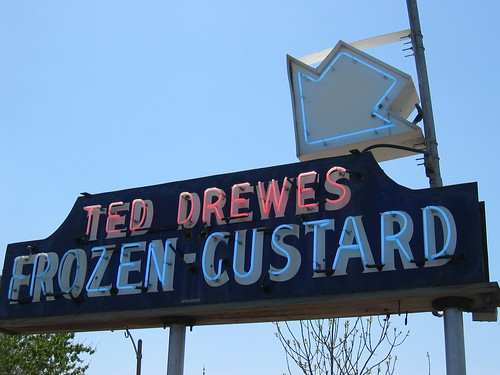 The place is a St. Louis institution, dating back to 1930. Yum. This was the gold standard of frozen custard. Our love of the stuff was reawakened. On the remainder of that trip, we had custard many a time, including some Kohr Brothers in Maryland and several stops at Culver’s on our way back through the midwest. Kohr Bros. was a pale imitation of Ted Drewes, but Culver’s was almost up to the Drewes Standard.

But then we were back in custardless Seattle, making do with regular ice cream. On one of our many visits to Portland (Oregon, this time), we discovered Sheridan’s across the river in Vancouver. Good Stuff–on par with Culver’s. The custard was getting closer, but was still 180 miles from Seattle. Then last summer, we found out about Old School Frozen Custard, down in Bonney Lake, just 45 miles away! Their custard is better than Sheridan’s… and they’re planning a store in Seattle! Woot!

This long pathetic tale of culinary addiction brings us to yesterday, when Seattlest posted an article about the arrival of frozen custard here in the Emerald City. It’s not Old School, but a newcomer: Peaks Frozen Custard. Peaks was started by someone who really knows his custard: a Wisconsin native named Tim Wolfe. Sounds promising. The author of the Seattlest article is a Wisconsin native, too. How does Peaks compare to his beloved Kopp’s?

… Kopp’s is Chuck Barry and Ray Charles rolled into one, while Culver’s and Sheridan’s are Pat Boone.

So we were both delighted and wary when we heard about the coming of Peaks. But we needn’t have worried. Peaks is Elvis. Their custard has soul.

Excellent. I’ll be sure to report back after we’ve tried it.

There’s only one problem. Peaks is too close to home. It’s less than two miles from here and sits just around the corner from our favorite grocery store. Must… resist… pull of frozen custard too strong… willpower weakening…