Back in the high-flying Internet boom of the late 90s, we were big fans of HomeGrocer. One of the first net-based grocery delivery places, HomeGrocer did everything right. They had a huge selection at very competitive prices. Combine that with an easy-to-use website, friendly drivers, and great customer service and it’s easy to see how the company rapidly developed a rabid following here in Seattle. Unlike the “get big fast” approach Amazon was taking at the time, HomeGrocer was taking it slow, expanding into new markets gradually. While they continued to lose money, the approach was paying off: established markets like Seattle were close to being in the green. Then in 2001, HomeGrocer was acquired by Webvan. Webvan’s approach was more typical of the era: “let’s burn through as much money as possible.” Everything was worse: service, quality… the whole shebang. We stayed customers, but where HomeGrocer had replaced our big weekly trip to the store, our Webvan orders were smaller and less frequent. We weren’t the least bit surprised when Webvan went out of business in the summer of 2001.

Here in Seattle, that left us without a good alternative. Safeway and Albertsons both offered delivery here, but the selection wasn’t as good and they both charged for delivery no matter how big your order. There are other specialized places for produce or dairy, but I’ve never found them very compelling either.

Then last year, I heard that Amazon.com was getting into the grocery delivery business. AmazonFresh started out slow, first delivering only to a handful of zip codes in the Seattle area and only to Amazon Prime members. Over the months, we’ve watched them slowly expand their delivery area toward us. Then a couple weeks ago, they held a vote to determine which of four zip codes would be the next to open. It was close, but our zip, 98115 squeaked out the win.

On Friday, I got a message from AmazonFresh inviting me to order. We placed our first order Saturday night for delivery Sunday afternoon. The truck arrived right at the beginning of the 1 hour delivery window… 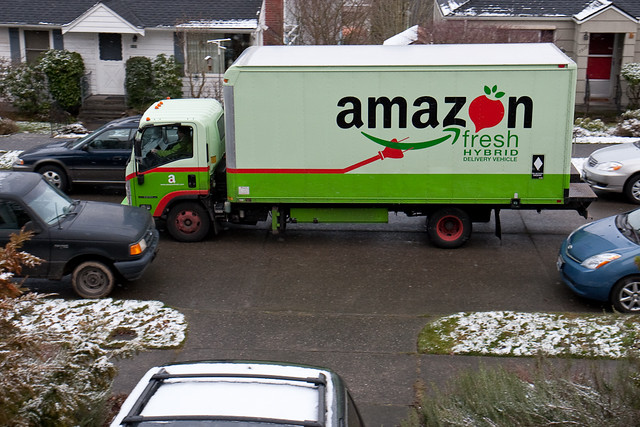 And the verdict? Well, it’s a little too soon to say. We didn’t order any meat or produce, so we can’t judge their quality. The ordering process certainly went smoothly–it is Amazon, after all–and the delivery was timely and efficient. The product selection seems quite good, though a few items we wanted to order weren’t available for immediate delivery, despite being listed in the catalog. Prices are generally good, but we came across a few items that were clearly way out-of-line. I was also a little disappointed that our delivery arrived in paper grocery bags instead of some sort of reusable tote. Other than that, though, I have no complaints.

I should mention that AmazonFresh bests dear departed HomeGrocer in a number of ways. For one, they offer much more delivery flexibility. In addition to offering one-hour time slots for attended delivery, they offer 3-hour slots for unattended delivery (they leave the groceries on your porch in temperature-controlled totes) as well as “Pre-Dawn” delivery. HomeGrocer only offered attended delivery during 90-minute time slots. In addition, AmazonFresh offer a selection of other Amazon.com items–books, movies, toys, electronics, small appliances, etc.–for delivery with your groceries. They call this Amazon.com Now and it reminds me of another company from the first Internet boom. Kozmo.com, which started out as a DVD delivery service, gradually increased their selection to include snacks, then books, music, and electronics. I bought a digital camera from Kozmo once. It was like ordering a pizza: you placed your order (online) and an hour later it showed up at your door. AmazonFresh requires seven hours of lead time, but its still cool.