I’m not sure why or how, but sometime around the release of Glass Houses in 1980, Billy Joel became my favorite musician. My friend Peter and I made it our quest to track down every last bit of his music. I remember searching every record store I visited for a copy of Cold Spring Harbor (which didn’t become widely available until its re-release sometime later). 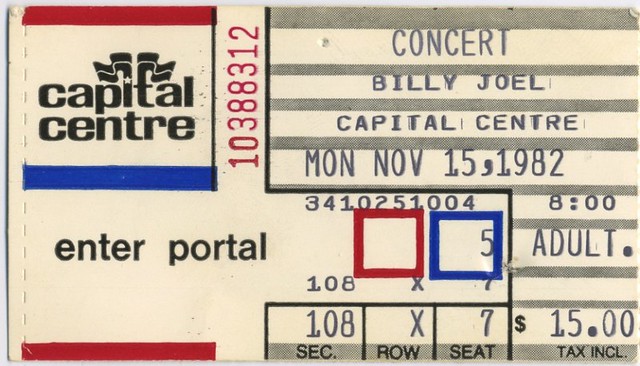 Amid this teenage fandom, we learned that Billy would be coming to DC. We convinced Peter’s mom to take us to the concert and off we went: a pair of fifteen year olds at their first big rock concert. It was a blast. The Nylon Curtain had come out earlier in the year and I seem to recall he started the concert with “Allentown.”

My biggest memories of the concert have nothing to do with the performance, though. The first was the smell. I’d smelled pot before–though naively had no clue what it was–but this was a full-on assault of pot smoke. Pete’s mom clued me in. Clearly Nancy Reagan’s advice didn’t resonate with Billy Joel fans. The other big memory is of the last song played over the PA before the concert began. As the band came on stage, they kinda danced their way to their instruments to the sound of Sam Cooke’s Chain Gang. The Pretenders’ Back on the Chain Gang had just come out and I remember afterwards trying to describe the song to friends: “no, not The Pretenders’ one. The old one, from the 60s” I guess it would have helped if I’d known who Sam Cooke was at the time.