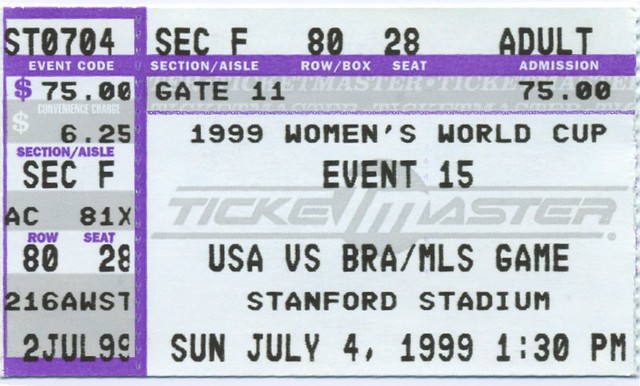 Ah 1999. Kosovo, Columbine, Euro, Jar Jar, Dow 10K, Y2K fears, and the toilet-seat clamshell iBook. What a year. It was also the year the US Women’s Soccer Team won the FIFA World’s Cup.

Back then, Kathy’s parents lived just south of Silicon Valley. We had a visit planned that summer and just before we left, Kathy found out that one of the semi-final games of the Women’s World Cup was being held at Stanford while we were there. Best of all, the US had just beaten Germany in the quarter finals, so the game would feature the US team against Brazil. She bought three tickets so her sister could go with us and off we flew to California.

As it turns out her sister chose not to go with us, so her mom did instead. On July 4th, we drove over to Palo Alto, fought through the traffic and headed up and up and up into the stands. You might notice the ticket says Row 80. Yeah… 80! We were waaaaaay up at the top of the stands, but at least we were at mid-field.

I thought the game was pretty exciting, though the New York Times described it the next day as “largely uninspired.” Maybe it wasn’t the greatest game ever, but it was great to just be able to see that team play… Mia Hamm, Michelle Akers, Brandi Chastain, Brianna Scurry. A US women’s soccer team full of household names? How strange. Was this how it would be in the new century?

Obviously, the US won the game–Wikipedia tells me it was 2-0–and went on to play China in the final six days later. They won that game, too, when Brandi Chastain scored the winning goal and famously ripped off her shirt in celebration. 1999.