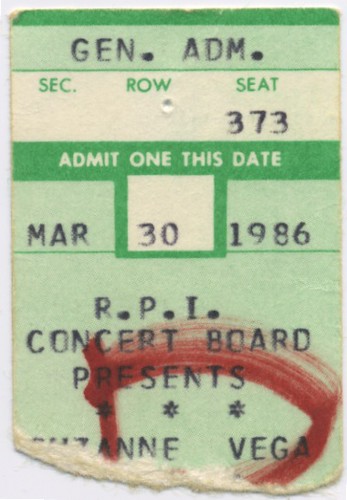 Let’s fire this ol’ weblog up and see if she still runs, shall we? What’s this? An already-written post waiting in my “drafts” folder? Excellent…

Ah, yes. Suzanne Vega. My freshman year at RPI, I lived in “The Quad.” They were the oldest and most run-down dorms on campus (two years later, they would undergo a huge renovation project), but they were also the most centrally-located. Most of the academic buildings were nearby and the Rensselaer Union was right across the street. In the center of The Union is the McNeil Room: not a bad venue for acts too big to be playing in a bar, but too small for the Field House.

I’d already seen a couple concerts there by the time Suzanne Vega rolled into town in March. I’m pretty sure I’d seen BoDeans there as well as Treat Her Right (Mark Sandman’s pre-Morphine band). I would have seen They Might Be Giants there, too, but as the sign on the door said, “They Might Be Canceled.” And they were.

Oh, but I was supposed to be talking about Suzanne Vega, wasn’t I? I honestly have no recollection where I first heard her. I do remember having a cassette of her debut album–an actual pre-recorded store-bought cassette, one of only a couple I ever remember buying. This was before her big breakthrough with “Luka” and “Tom’s Diner.” The concert was a low-key folkie kinds of affair. Even the smallish venue of the McNeil Room was only about half full, which gave the show an intimate vibe.