One of these days, I’ll write a few posts about our big trip to Iceland and Denmark back in August. For now, you’ll have to be satisfied by the pictures I’ve been posting on flickr. Which brings me to the point of this post. As I was selecting and editing my photos to post to flickr, I eventually got to our brief stop in Solbjerg. 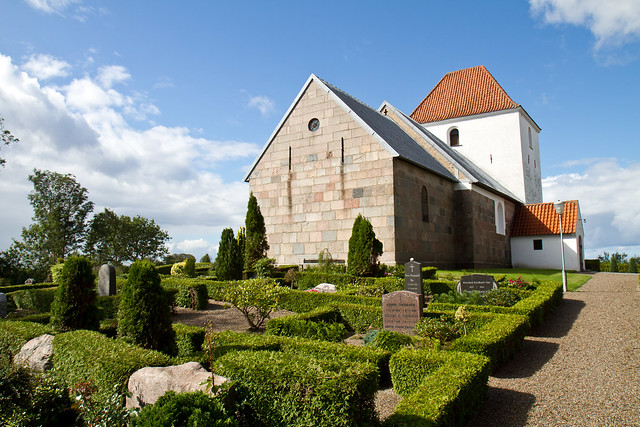 Solbjerg is on the island of Mors in the Limfjorden. In my last bout of serious Danish genealogy research a few years ago, I found out that my great great grandparents, Heinrich Frederik Ludwig Mohr and Ane Marie Sørensen, were married in Nykøbing on Mors and that Ane Marie was born in Solbjerg. I also settled, once and for all, the question of Ane Marie’s maiden name. Or so I thought. If you’re not interested in genealogy, stop reading now.

You see, my grandfather’s name was Clifford Frandsen Luck Mohr. Frandsen was his mother’s maiden name and his father was Thorwald Luck Mohr. Back in Denmark, it was spelled Lÿkke and the story was that it had been Ane Marie’s maiden name. For years, I’d recorded her name as Ane Marie Lÿkke. But as I started researching this part of my family, the evidence quickly began to mount that this was not the case. Thorwald’s christening certificate, as well as the corresponding record in the Danish church books, gave her name as Ane Marie Sorensen. Then I found a couple of Thorwald’s sisters in the California Death Index. Both listed Sorensen in the “mother’s maiden name” field. Next up was Ane Marie’s death certificate, which listed her father’s name as Anders Sorensen. Once I knew to look in Solbjerg, I found her birth record in the church books:

There it was, plain as day: Ane Marie Sørensen. Not Lÿkke. Sørensen. And her father? Søren Andersen. Not quite what her death certificate said, but close. This was in the brief period of time in Denmark when patronymic1 names were still in use, but only the “male” versions. A generation earlier, she would have been named Ane Marie Sørensdatter. A generation later, Ane Marie Andersen. With that settled, I tried to work my way back a bit further, but I couldn’t find her parent’s births, nor their marriage. I was getting genealogy burnout, so I set it aside for a while. I had hoped to get some more Danish research done just before our trip, but that never happened.

So that brings us to last week, when I was culling, editing, and captioning photos from our trip. I fired up Reunion to check on Ane Marie’s birthdate and a note I’d made about her father’s name caught my eye. I thought I’d double-check her birth record and when I did, I noticed something I’d never noticed before:

This is the Parents column of Ane Marie’s birth record. It lists her parents as Søren Andersen and Maren Andersdatter, both of Solbjerg. But what’s that text right at the beginning of the second line? Lÿk? Could it be short for Lÿkke? Off I went to find out…

Fortunately for me, Denmark’s National Archives (Statens Arkiver) has made it very easy to do genealogy research from home. First, there’s Arkivalieronline.dk, which has scans of virtually all of the existing churchbooks for every parish in Denmark, from the 1600s through 1950. They’re not indexed, so using Arkivalieronline is just like using microfilmed church books: pick the parish and date range, then page through until you find what you want. Arkivalieronline also has scans of Danish census returns (Folketælling) accessible the same way. The other piece of the puzzle is Statens Arkiver’s DDD: Dansk Demografisk Database. The DDD contains extracted and indexed census returns, as well as immigrant and emigrant registrations. Best of all, both sites are completely free.

When I last worked on this stuff, the DDD records were woefully incomplete outside of Copenhagen (even now, they’re a work in progress). This time around, I searched for “Lykke” and “Lÿkke” in Solbjerg and turned up a Søren Lykke, an Anders Sørensen Lykke and a Søren Andersen Lykke, along with their families. Another search for the same names without the added “Lÿkke” turned up the same households in different census years. Sure enough, Ane Marie Sørensen’s father was Søren Andersen Lÿkke. His father was Anders Sørensen Lÿkke and his grandfather was Søren Lÿkke. The census records identified siblings, parents, birthplaces, and ages. Back in Arkivalieronline I was able to find all the related birth and marriage records in the church books and go back three more generations from Ane Marie in just a few hours of work. Arkivalieronline plus DDD is much more useful than either resource alone. Cool!

Of course, the whole purpose of this post is to reveal the mystery of Lÿkke or Lykke2. Why did Ane Marie’s paternal ancestors use both patronymics and “Lÿkke?” Why didn’t she? Well, it turns out the Lÿkke name was passed down from father to first born son. Daughters never took the Lÿkke name, nor did later sons (with one exception3). In this case Lykke is what’s called a tilnavn in Danish–a taken or added name. There’s no rhyme or reason in the world of added names. They’re neither patronyms nor true surnames and their use was unpredictable from generation to generation. Sometimes they would appear for a generation or two and fall out of use again. Other times, they would stick around for generation after generation. What do they mean, though? Who knows! Some added names came from the farm a family worked or the occupation of some ancestor. Some were related to geography or the physical appearance of an ancestor. And some were taken for no apparent reason at all. Maybe they just wanted to imitate the nobility, who had fixed surnames long before the common folk. As for Lÿkke, it’s still a mystery. It can be translated as “luck,” as it was in my family, but it can also mean “happiness.” Maybe old Søren was particularly lucky or perennially happy. There was a noble family in medieval Denmark with the Lykke name; maybe an ancestor of mine worked for the noble Lykkes.

So, it seems my great great grandmother wasn’t Ane Marie Lÿkke as we’d thought. On the other hand, Lÿkke was her family name after all.