This August, we will be embarking on a big cross-country driving trip. This is the third time Kathy and I have done this since we’ve lived in Seattle and the first with two kids. Let’s recap: 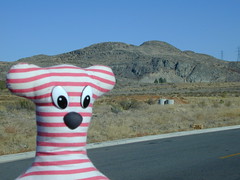 In October 1999, Kathy and I headed east across the northern US. We took our time and tried to stay off the interstate where possible. It took us ten days to get from Seattle to Chicago and we didn’t leave the east coast until day 23. After the slow start, the last few days were a mad dash to get back to Seattle in the month we’d allotted. Despite some setbacks–most notably food poisoning that hit us each in succession as we crossed the Great Plains–it was a great trip.

In keeping with the “let’s wander” spirit of the trip, we made no reservations or other plans in advance. We had a stack of maps, some AAA guidebooks, and an early CDMA cell phone that was pretty much useless outside of cities. Most of the time, we waited until rolling into town before trying to find a place to stay. Occasionally, we would try to call a few hours in advance to make a last-minute reservation. For the most part, this all worked fine, though in a couple places we ended up staying in dicey motels we would normally avoid.

Photos from the first Big Trip are on flickr. 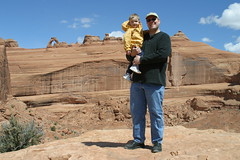 A year after our first Big Trip, we welcomed Henry into the world, sending our world into a wonderful tailspin. By the time Henry was 2½, we somehow thought we were ready for another big car trip. We’d driven down to California a couple times by then and neither trip had gone particularly well. Nonetheless, in April 2003, we pressed forward with our second Big Trip.

This time, we headed southeast from Seattle and spent a few days in and around Moab and the Four Corners area before looping back up into Colorado and continuing on our way east. As we could have predicted, things did not go well at first. Henry had a hard time with the long days in the car–even when punctuated by hikes and other fun activities–and didn’t sleep well at night. By the time we were in Colorado, we were ready to turn around for home. Then something amazing happened: almost overnight, Henry settled into the rhythm of the road. Everything suddenly got easier. The rest of the trip was a breeze compared to the first few days. By the time we got home, I was willing to call the trip a rousing success (Kathy was a bit less sanguine). Still, I knew it would be a while before we would try another month-long driving trip.

On this trip, we still didn’t plan very far ahead, but we did call at least a day or two in advance for reservations. We never had trouble finding a nice place to stay.

Photos from the second Big Trip are also on flickr.