Well, we somehow managed to leave the house a few minutes early this morning. We had packed the car with everything we could last night, so we got up and out quickly. Leaving our neighborhood, the GPS said 601 miles to our hotel in Butte, Montana. A long day.

Fortunately, the car, weather, and traffic made for an easy drive. Western Washington was partly cloudy, but as we crested the Cascades, the sky cleared to a gorgeous blue. We settled right in to the road trip state of mind. Approaching Spokane, the boys decided to have a little candy from the block party piñata last night. Henry had a piece of Double Bubble (widely recognized as the hardest bubble gum known to man) and Charlie had a piece of hard cherry candy. We’re always a little leery of giving Charlie hard candy, especially when he’s not really paying full attention, but we let it go. Before long, we heard a somewhat puzzled voice from the back seat: “uh… guys… one of my teeth just fell out.” It was Henry; the Double Bubble had adhered itself to one of his baby molars and when he yanked the gum to get it off, the tooth came along for the ride. It’s been a long time since Henry has lost a tooth unassisted by the miracle of dental medicine, so it came as quite a surprise.

Just as we were all laughing about that surprise, Charlie started choking on his candy. At first, he couldn’t breathe. I hit the brakes and pulled over as Kathy and I tried to remember our latest Red Cross training. By the time we stopped, though, he was breathing again. He was shaken and still in some physical distress, but was able to talk and drink a little water. We were only about 15 mintues from our lunch stop, so we got going again, thinking we’d be able to calm him when we stopped. Still, something wasn’t quite right. We decide to get off the highway and find a place to stop. Just as we were pulling in to a parking space in front of the the Gonzaga baseball fields, Charlie threw up right into his lap. In the middle of it all was one shiny red candy.

Almost immediately, he felt better. By the time we cleaned him up and changed his clothes (as discreetly as possible), he was back to his usual self. When we were cleaning up his booster seat and other stuff (including an old first-generation Playstation Portable that’s now sealed in a Ziploc in the trunk and may well have seen its last bit of action), he called out to a passer-by: “I have something to say to you! A little bit ago, I threw up!” Ah, Charlie. 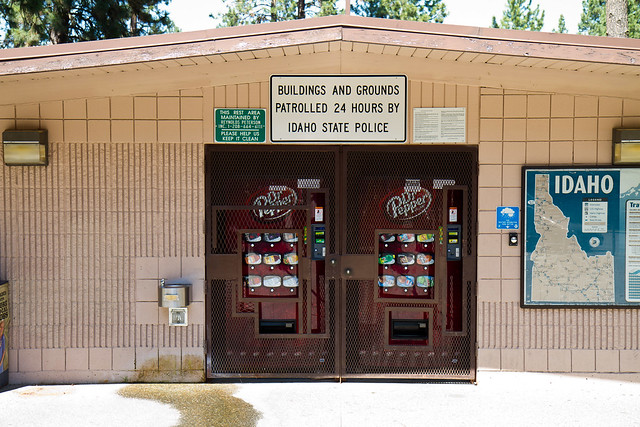 The rest of the day was delightfully uneventful. We stopped for dinner and fueled up the car in Missoula, before our last 90-minute run towards Butte. On the way, we got a light show thanks to some lightning and shockingly pink virga illuminated by the setting sun. We pulled up to our hotel in Butte at about 9:30pm. And what a hotel it is. The Hotel Finlen was built in the 1920s and was the place to stay in Butte in its day. Charles Linbergh stayed here. So did JFK. But Butte isn’t the town it once was. By the early 80s, most of the mines had closed and the great Berkeley Pit, once the source of so many riches, began to turn into a toxic lake. The only folks getting riches from the pit these days are researchers studying the bizarre organisms that manage to thrive in the acidic chemical soup. Butte is a shell of its former self, but here sits the beautifully restored Hotel Finlen, a beacon for the weary traveller amidst the… oh what am I saying? It’s strange. Don’t get me wrong, the Finlen is beautiful and comfortable and quiet and I’d take a stay here over any of the cookie cutter places we’re likely to spend our nights at on the rest of this trip. Yet its vaguely unsettling, like something out of a Coen Brothers movie. Or maybe I’m just road-addled. 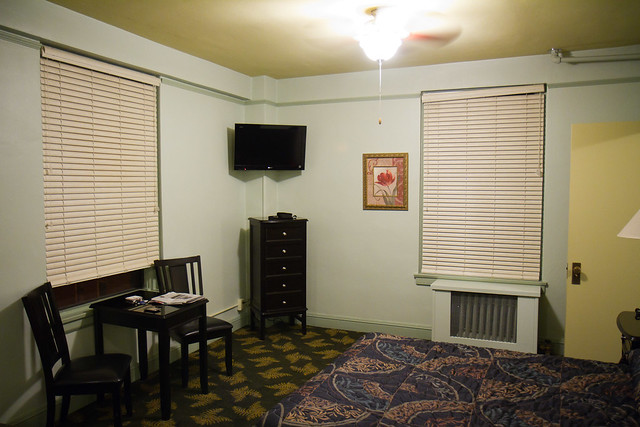