A non-travel day! This was our first of two days in the Black Hills of South Dakota. We were here back in 2003 with Henry, but over the course of three days, the weather never once cleared up enough for us to see Mount Rushmore. On our last day there, we went to the National Monument anyway and gazed out into the mist. Oh, and it snowed, too. This time couldn’t have been more different. Absolutely gorgeous blue skies, sun, and pleasantly warm temperatures. We started the day off at Mount Rushmore. Well, no. We started the day off at the breakfast bar in our hotel. For some reason, the boys find hotel breakfast bars to be the pinnacle of breakfast excellence and are always deeply disappointed when we go our for “real” breakfast. I do consider it a minor victory that they both prefer the breakfasts we had last summer at the Danish hostels we stayed at… but I digress. So, yes, a fine and nourishing breakfast then Mount Rushmore. 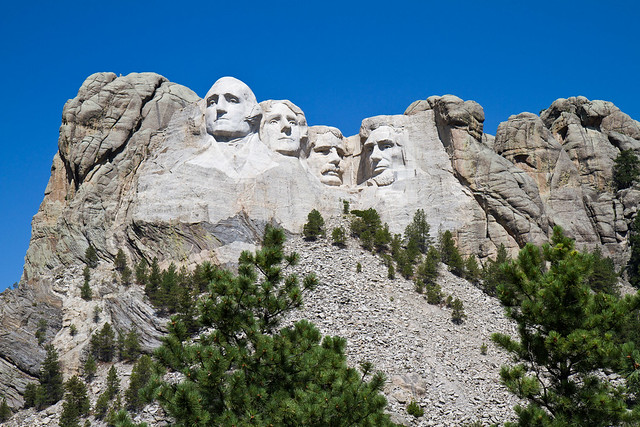 Sometime after I was up here as a teenager but before our 2003 visit, they built a huge new parking garage, visitor center, restaurant, amphitheater, and viewing terrace. Even on this busy summer day, parking wasn’t a problem. We managed to convince the boys to go on the Presidential Trail across the valley and up onto the slope below the carving. It was well worth it (though I think Charlie would beg to differ). 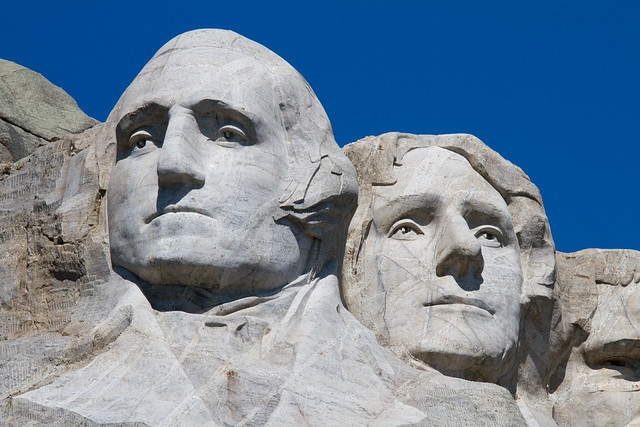 As a major tourist attraction, Mount Rushmore naturally attracts visitors from all over the world. While viewing the mountain and walking the trail, we heard quite a few languages: English, Spanish, Mandarin, Japanese, French, German, and Mater. Yes, Mater. Anyone who doubts that Larry The Cable Guy’s schtick accurately portrays one regional dialect of American English need search no further than the trails of Mount Rushmore. 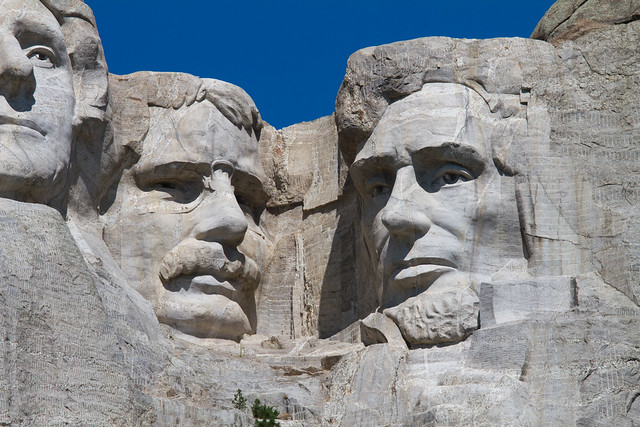 I guess this is as good a point as any to mention one interesting aspect of our time in the Black Hills. Next week is the huge Sturgis Motorcycle Rally just up the road in Sturgis. Everywhere we go in the Black Hills, motorcycles are everywhere. There are “Bikers Welcome” signs on businesses and special motorcycle parking areas. In the Mount Rushmore parking garage, we were joined by a huge group of motorcycles including a custom purple trike that the boys admired. The bikers are by and large exceedingly polite, but the sheer number of additional people everywhere we go is a pain. Given the choice, I would schedule our next Black Hills trip not to coincide with Sturgis. As we were leaving the Rushmore parking garage, a few bikers were leaving, too. The sudden cloud of old-school exhaust smells prompted Charlie to exlaim, “This smells like Autopia!” (refering to the Disneyland ride with the stinky exhaust cars). 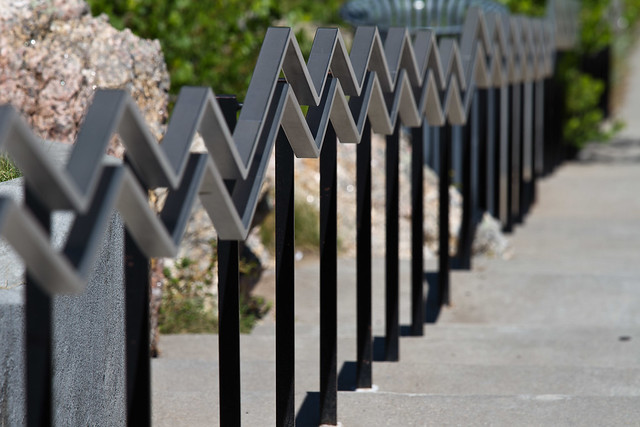 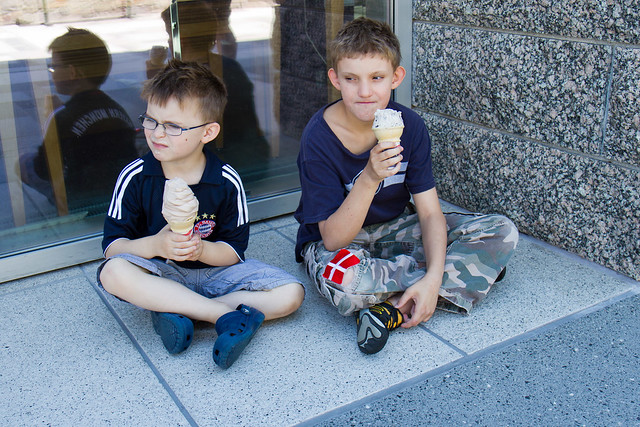 The plan after leaving Rushmore was to loop through Custer State Park, first up through The Needles, then around the Wildlife Loop for a chance to see some bison, antelope or elk. Half way through the The Needles road, we went for a little mini-hike (no more than a half mile or so), just to get out of the car again. Charlie protested vehemently, but a couple minutes into the hike became as enthusiastic as any of us. It didn’t take long to get away from the constant racket of motorcycles and into the peacefulness of nature. 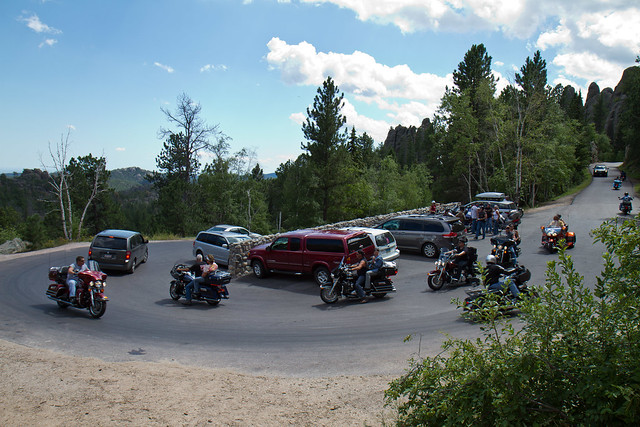 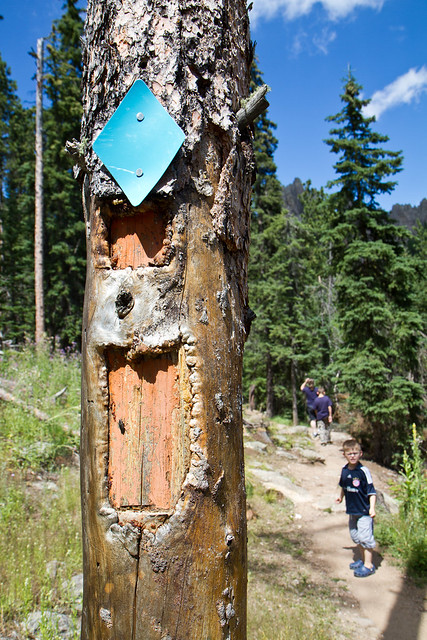 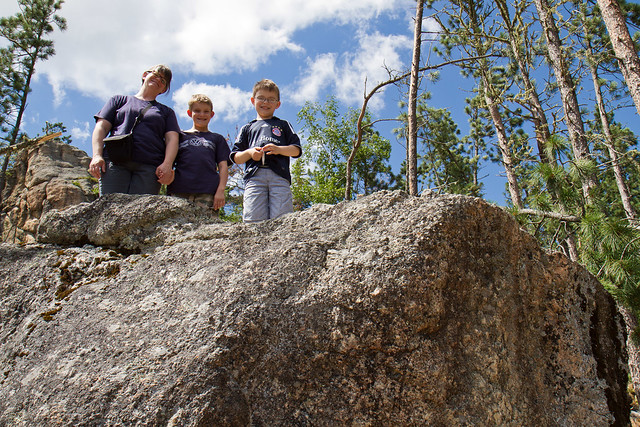 Of course our mini-hike wasn’t quite as mini as it seemed and by the time we got back into the car, we were all starving. We had some lunch food in the car, but drank all our water on the hike. Instead of continuing on our drive, we detoured into Custer City, bought some drinks and stopped at a little city park for a picnic lunch. We extended the detour with a stop at a mini-golf place (the first of many such stops on this trip, I’m sure). We had to rush the last few holes because thunderstorms were looming all around us. By the time we were leaving Custer, we decided it was too late to do the Wildlife Loop, so we just headed back to the hotel. The boys had an ulterior motive for heading back: they wanted to go swimming. So, we all went swimming in the freezing hotel pool. Brr. 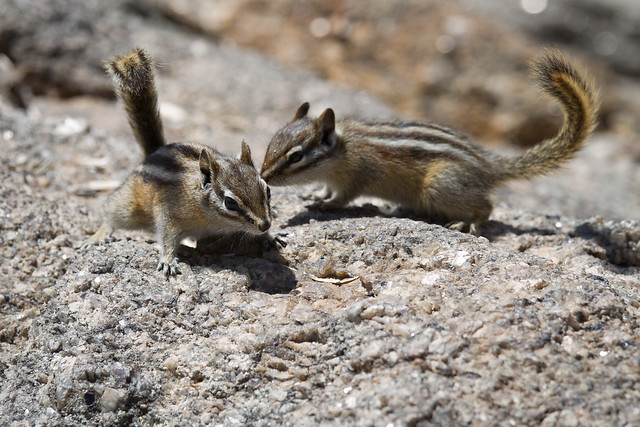 We finished up the day with a thoroughly mediocre dinner at a Mexican place in Keystone. It’s best feature was its proximity to the hotel.