Back in the car today, but no long-distance driving. We started the day with a drive north to one of Chicago’s most beautiful cemeteries. Graceland was opened in 1860, when this area was well north of the city limits. Almost from the start, Graceland was Chicago’s “upper crust” cemetery. Among its headstones and mausoleums are a who’s who of Chicago society: Marshall Field, George Pullman, Philip Armour, mayors, governors, senators, and more than a few notable architects (Burnham and Root, Adler and Sullivan, Ludwig Mies van der Rohe, Walter Netsch). Among the well-to-do are a few less august people, like a grocer and his wife, and a piano finisher. They’re the ones I’m interested in. The grocer was Jacob Oestmann, an immigrant from Germany who opened his store a year after he arrived in Chicago and ran it until his death 60 years later. Jacob was my great great grandfather. 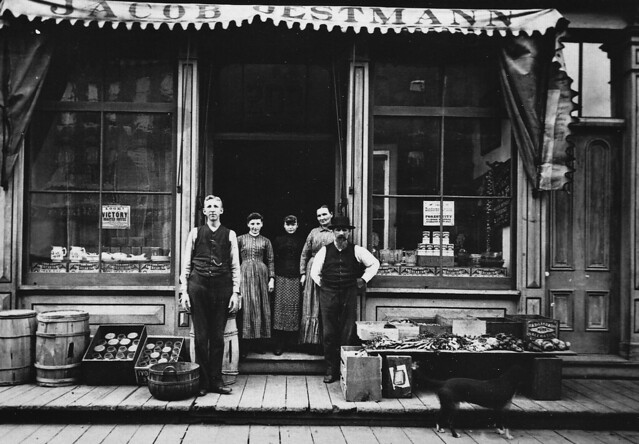 The piano finisher was another great great grandfather of mine. Johann Knuth was a German immigrant, too, from the town of Swinemünde on the Baltic Sea (now in Poland). His son Charles married Jacob’s daughter Anna.

When we visited Chicago back in 1994 or so, I didn’t know nearly as much as I do now about my family history. I had only started working on my genealogy a couple years before and at that point almost everything I knew was based on research by others. Nonetheless, I knew Jacob and Fenne Oestmann were buried in Graceland Cemetery. We found their graves thanks in part to some very kind people at the cemetery office. At the time, though, I didn’t have a camera with me (can you believe it?). This time I did: 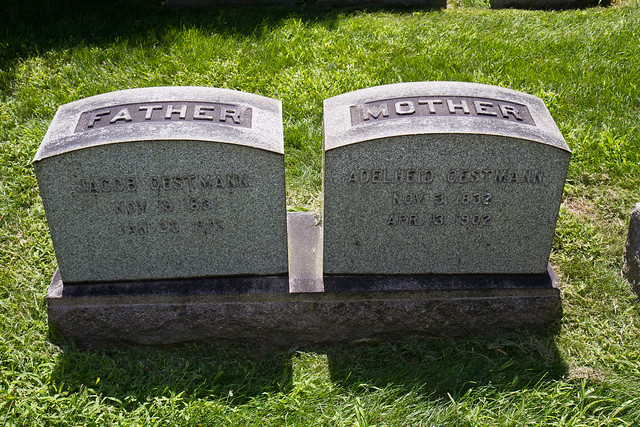 Since then, I’ve unearthed a lot more information about my Chicago ancestors, including a death certificate for Johann Knuth, who died “From Asthma” in 1887 at the ripe old age of 59. Death certificates back then didn’t include burial information, but the word “Graceland” was written at an angle across the right side of the document. So I asked at the cemetery office today and there is indeed a “John Knuth” with the right death date buried in Graceland. Unfortunately, he’s buried in one of the older sections of the cemetery with small flat stones, many of which are heavily weathered or overgrown. Map in hand, Henry and I headed out on our search and almost immediately found him! The stone was indeed heavily weathered, but it was easy to make out “Johann Knuth” and the death date. 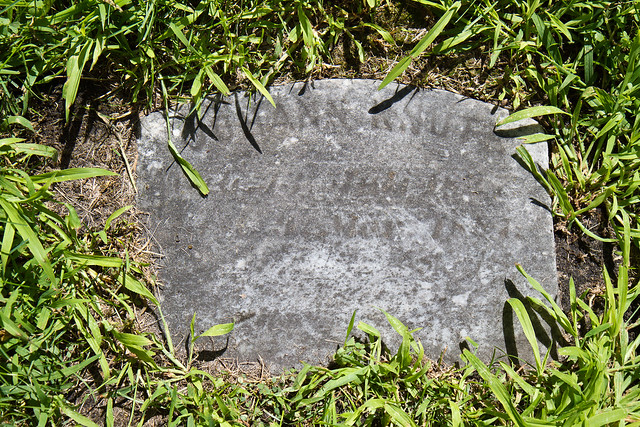 Kathy thought of a trick we saw used in Denmark on the Jelling Stones: we doused the stone in water. It was immediately easier to read, but at just the right angle, it was even easier. Cool. 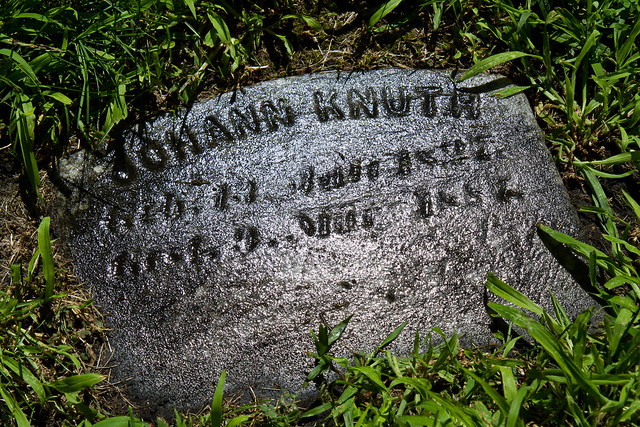 With that success under our belt, we headed off to Lincolnshire, Illinois, home of the mighty Par-King Skill Golf. When we were planning this trip, we asked Charlie what he wanted to do and his answer was “play mini-golf.” So we read a variety of “best mini-golf” lists and compiled our own list of places somewhat near our route. One that showed up on almost every list was Par-King. I’m pretty sure that on some level, Charlie thinks this whole trip is about going to Par-King. Anyway, we finally made it and all those lists are right: it’s a great mini-golf place. There are actually two separate courses (we did the red course). The holes aren’t particularly difficult or wacky, they’re just very well designed and creative classic mini-golf holes. I’m not sure I’d drive half an hour north of Chicago just for Par-King, but for Charlie’s sake it was worth it. 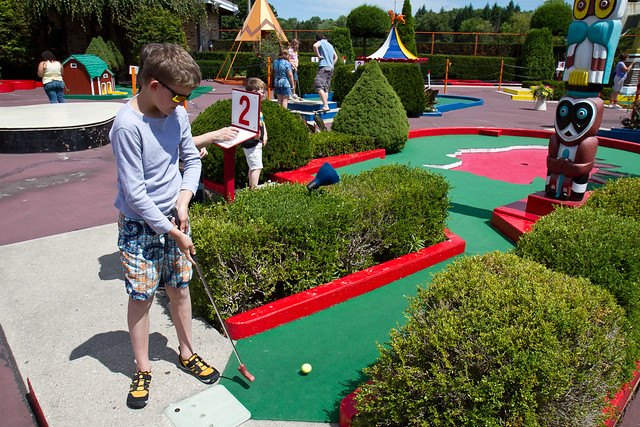 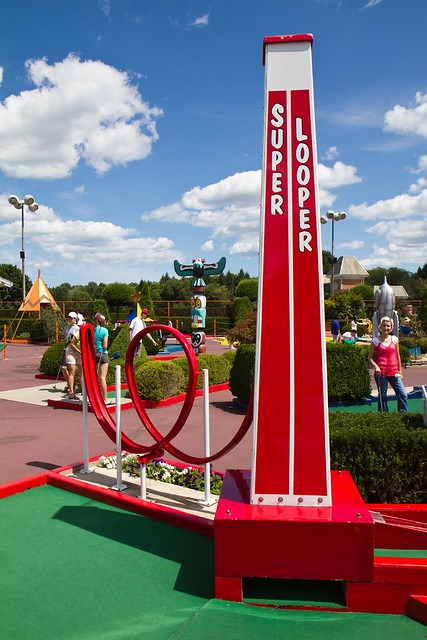 Another place we’d heard about before our trip was Superdawg Drive-In, a Chicago institution that has been serving Chicago-style hot dogs since the 1940s. We planned to go to the original Superdawg in Chicago proper, but on our way back from Par-King, we stumbled upon their second location in Wheeling. We took full advantage of the “Drive-In” part of Superdawg and stayed in our car for carhop service. The Superdawg is indeed a Super Dog. 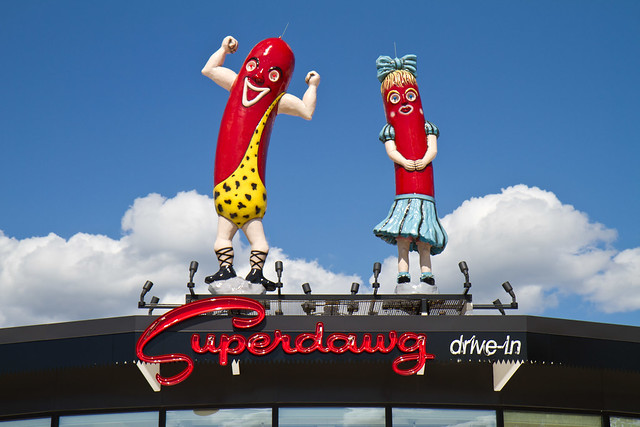 On the way back into Chicago, we had to take a detour because of construction on one of the highway ramps. The detour took us past another Chicago cemetery with some ancestors of interest, so we stopped by Mount Olive Cemetery. This is another one we’d been to before and I had no trouble finding the graves of Heinrich and Ane Marie Mohr, my great great grandparents. Unfortunately, we had no luck finding another grave that’s supposed to be there. The section it’s in has a lot of missing and weathered stones, so I’m not surprised. 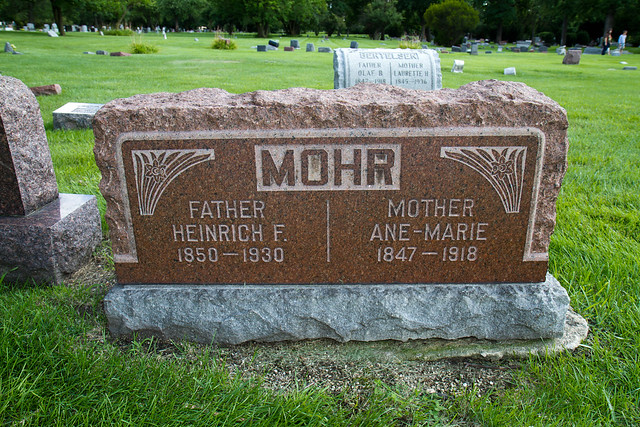 Update: Coincidentally, the same day we were out at Mount Olive Cemetery, I received an email from a distant cousin (another of Heinrich and Ane Marie’s descendants) with a photograph of a painting Heinrich made. I responded that I never knew he painted artistically (Henry was primarily the craftsman sort of painter, not the artistic kind). My cousin told me, “[Henry] was supposed to have painted the ballroom of The Palmer House and a large Santa mural on the Ward’s department store at State and Adams.” It’s funny… A few years back I heard from another cousin that Henry had supposedly come to Chicago to work on the gilt work at the Great Columbian Exposition. Each branch of the family carries forward a different piece of the story.

Back at the hotel, we had just enough time for the boys to go swimming before we had to leave for Wrigley Field. We took the Red Line ‘L’, which was very convenient. There’s a station just across from the hotel and another next to Wrigley Field. Along the way, we got to experience one of the delights of city life: a slightly-crazy street preacher in our subway car. I’m still not quite sure what Charlie made of the guy, but I was quite amused by his pronunciation of “Jesus,” which sounded almost exactly like “cheeses.” Yes! Yes, I do have love for cheeses in my heart!

Wrigley Field! The Cubbies! What an experience. I’ve always heard about the unique and different feel of the old classic ballparks like Wrigley and Fenway, but couldn’t really relate until today. Wrigley feels less like a behemoth megasportsplex and more like a few simple grandstands on steroids. Sure the concourses are crowded and the walk up the ramps to the top level (where our seats were) is long, but the place feels like it’s all about baseball. No jumbotron, no annoying announcements or trivia contests, no dancing grounds crew; just baseball, pure and simple. Despite being way up high, our seats felt improbably close to the field. And for whatever reason, Charlie was able to stay in his seat and watch a good six innings of baseball (three or four more than he can usually handle at Safeco). It’s not all wine and roses, though. For one thing, there are far too few bathrooms for a full stadium. And if you want to eat or drink at the ballpark, your choices are pretty limited. On the whole, though, I could live with the limitations if I could see the M’s play in a field like Wrigley every game.

The ‘L’ ride back to the hotel was quick and painless, especially given the crowds packing the platform and train. I suppose it helped that the Cubs won. Still, it makes me anxious for the day Seattle’s light rail and trolley lines extend close enough to our house to be useful.